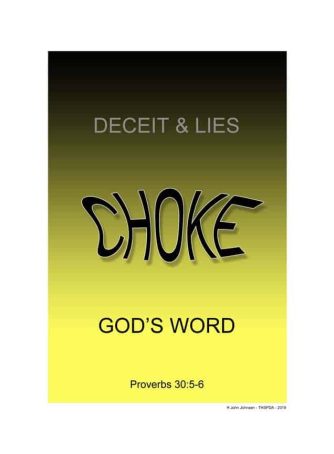 Here is a list of 6 don’t believe the lies items that have come up as questions or problems faced by younger people during several surveys about the Bible and the Millennial generation:

I will do my best to help answer and allay any fears or misunderstandings about these comments. After all, you are here to resolve some issues and make things better for yourself, and that’s the first place to start.

There are many things said that are not the truth, and some that are so how do you separate the truth from fiction? Hopefully you can do it here with no hidden agenda.

Now that would be true if you didn’t believe God exists. Why would anyone care about you if you didn’t know or acknowledge them? It’s easy to say something with nothing to back up the comment. I believe and my updated (today’s term) life is absolute proof that God cares for me.

I guess if you don’t like a particular group or religion it is very easy to call it a cult. So, what is a cult in the dictionary definition?

According to Merriam-Webster, a cult is simply a system of religious beliefs and rituals. In general, a cult is a group that claims to belong to a specific religion but misrepresents any core teaching that would prevent a believer from being saved according to that religion. The key word here is “misrepresents.”

Now that is the definition, and it also explains ‘misrepresents any core teaching…” Well, Christianity teaches about the Bible and goes further into its teachings. Now there are those Christians who believe differently than the Bible, but they are not true Christians. Some so-called Christians do not follow what the bible teaches after they leave the church. Others claim to not believe in God.

Is Christianity a cult? No. It doesn’t force you to be a member or control how you think; although there are those who would try to convince you otherwise. If that happens find out their personal agenda and you may be surprised at their reasoning. Sermons are not brainwashing tools because you can listen or not listen. Being a Christian is a choice and you don’t have to join or be a member. It’s all your own decision and don’t let anyone con you into thinking otherwise.

I’m considered a Christian and do not let anyone change my thinking, just as I wouldn’t change their thinking. Remember, Christian is just a title if you don’t follow the Bible’s teachings.

Being special is something that you were from the day you were born as one of God’s creations. Every time you look in the mirror repeat this to yourself, “I am special” and truly believe what you are saying. And, never let anyone take that away from you. People can tell you things, but it is what is inside that is the most important.

It is hard to find the right job when you are young, and I know that personally. I worked for several ad agencies before I found the right one, and even then I eventually moved on to another better offer.

I would have been called lazy because I took time off between jobs to get back on track. So, don’t be concerned with being called lazy, unless you are really being lazy. Meaning you are not bothering to look for work, and if it is due to the Covid situation most people will understand because everyone is in the same situation. But don’t use Covid as an ongoing excuse because you can work from home at most companies.

You are in a committed relationship and your values tell you not to cheat, but you find yourself trolling the internet looking for some relationship because you just bored. And, you feel that is OK. Where are the values you put on that relationship or how you live?

No matter what you do, remember that your values are the one thing that separates you from everyone else. Keep them foremost in your mind and ignore those who say your values are not important. Hmmm… you have to wonder why they would say that unless they have an ulterior motive.

I sure hope this helps you to move forward if any of these items are on your list to be fixed. Please let us know what you think.

This site uses Akismet to reduce spam. Learn how your comment data is processed.